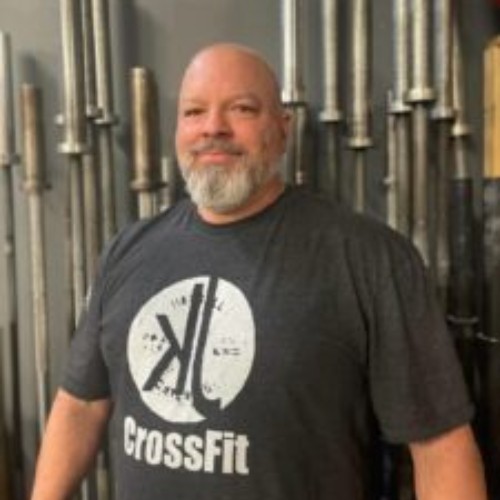 I grew up in New Orleans, Louisiana where I grew up playing multiple sports but really enjoyed baseball and basketball the most. In high school, I was on the cross-country team, swim team and played football. After graduating high school, I joined the Marine Corps where I served for 8 years and became a decorated war veteran in the Persian Gulf War. During my service I studied Kuk Sool Won Martial Arts for two years and played on a local Rugby team. I coached competitive girls’ softball at a high level for multiple years in Northern Colorado. I was introduced to Crossfit in 2006 and dabbled in it until 2013 when it really took hold of me and I have been training since then. I was able to podium in Crossfit competitions and have competed in numerous Crossfit competitions. During my Crossfit adventure, I have taken numerous weightlifting classes from several different coaches and found the most joy in weightlifting. During my journey, I have learned how to compete as a team member and as an individual.

My turning point came in late 2012. I didn't have balance in my life and I never focused on me. I was struggling to be happy with work and with myself. I was not healthy. That's when I dedicated myself to Crossfit and allowing it to be my outlet for balance. My family saw a change in me as well as my job, even though, I didn't know the effect it had on me. I was happy, filled with energy and excitement. My career exploded and my family life became easy because I was happy.

I love Olympic Weightlifting and Crossfit. It's my way to decompress and balance my life and it brings me happiness and excitement. My journey through weightlifting and Crossfit have forged me to be a better person. Having coached multiple sports for a decade, from young teenagers to masters. My motivation to coach is to help people achieve their goals and challenging them to be better. I want my athletes that I coach to be motivated and help them with life balance and happiness.